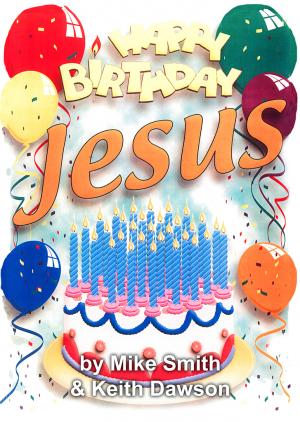 This delightful nativity for 4 - 8 year olds establishes the link between Christmas and Jesus' birthday with 7 easy to learn catchy songs. The story follows a group of children making a birthday card for Jesus, each child suggesting an idea to add to the card. As each new idea is created, a tableau is acted out including songs and dance if required. The show concludes with the traditional nativity scene. This easily adaptable show can be performed by a small number of children or as many as you wish in about 35 to 40 minutes.

The show opens with a group of six children making a birthday card in order to celebrate Jesus birthday. 'Happy Birthday Jesus' is sung as they all join in to help decorate the card. Hannah, one of the children, then suggests drawing a Christmas tree on the card and this acts as a perfect link for young children to understand the modern festivities and how they relate to the birth of Jesus; the children explain how trees are made from wood, and that the stable and manger were too. 'Christmas Trees' follows.

John's suggestion is to draw some fairy lights on the tree and this is linked back to the stars in the sky on the night Jesus was born; 'Starlight' is sung as the fairy lights enter and dance a short routine before joining in to sing.

After this musical number, the lights exit apart from one that remains behind to guide the shepherds. As the shepherds exit in order to follow the star, Hannah suggests drawing a donkey. After a failed attempt the travellers and Mary and Joseph enter and sing 'Travellers Song' as they journey towards Bethlehem. After a stroke of luck, Mary and Joseph find a place to stay and Hannah successfully draws a donkey to put on the card!

The Christmas Crackers are the next to enter as Jenny suggests drawing these next to represent the presents we all receive on Christmas Day. As you may have guessed, a few jokes are shared between the crackers which may or may not crack a smile... 'Crackers' follows.

The Kings enter and present their gifts to Jesus during the Crib Song. After this, the lights fade on the crib scene and the children put their finishing touches on the birthday card before everyone sings a reprise of 'Happy Birthday Jesus.'

Non-speaking roles: A Donkey, who is silent throughout, a Chorus of four Christmas Trees and four additional Travellers. Eighteen of the children playing Christmas Trees, Travellers, Crackers or Fairy Lights will also be required, each with a lettered card to spell 'Happy Birthday Jesus'. These could be additional children if preferred.

Non-speaking roles: A Donkey, who is silent throughout.

"What a fantastic show! I did this with Y1,Y2 and Y3 and it worked beautifully. On the last night we got a standing ovation! I am not musical at all but the CDs were really helpful and the children learned the songs easily. "