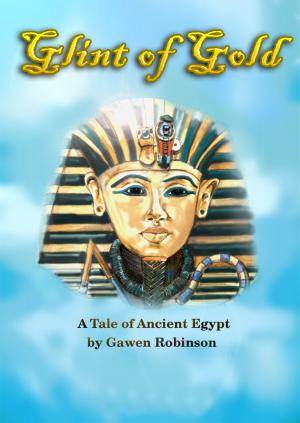 Allowing for flexible casting. Full instructions given for example cast sizes of 53 or 24 actors. (See "Casting" tab below).

No pianist required! This CD includes ALL Backing Tracks in the order you need them enabling production and direction to take place without specialist musical expertise.

Check out the "Production Notes" in the "Script Sample" below for full details of "Glint of Gold".

The Glint of Gold has been designed as a fully performable musical production but being topic based, is also easily adapted into an invaluable classroom teaching resource or a shortened assembly piece incorporating any other work the children may have done on the topic such as paintings, designs, costumes and models etc.

In this musical production, discover the story of Tutankhamun and some of the secrets of Ancient Egypt, alongside Howard Carter, Lord Carnarvon and his daughter Lady Evelyn Herbert as they explore the boy king's tomb. See the "Synopsis" tab for more details.

This show has been performed countless times with great success. See our "Reviews" tab for details.

Set in November 1922, the story begins with Howard Carter's famous discovery of the tomb of Tutankhamun. Along with Lord Carnarvon and his daughter Lady Evelyn Herbert, Carter enters the tomb and is astounded by the treasures buried for over 3,000 years. Before long the visitors discover the story of this little known king through the writing on the walls of the tomb. These story-telling pictures are called hieroglyphs and in the play they come to life, teaching the audience all about Ancient Egypt. King Tutankhamun, who had rested in peace for thousands of years, is now awakened and with help needs to learn part of the "Book of the Dead" before he can join his father (The god Osiris) among the stars. In the meantime however, we learn all about hieroglyphs, Queen Hatshepsut, Egyptian society, the gods and pyramids.

N.B. In the following list, the bracketed number shows the number of spoken lines each role has. An asterisk (*) before the character's name indicates that this character ALSO has solo or featured sung lines.

Non-speaking roles: 3 present-day Egyptians (final scene), Chorus of 20 sitting off stage. The 12 characters listed above that are asterisked but show "0" lines have NO spoken lines but DO sing as soloists or in small groups.

N.B. In the following list, the bracketed number shows the number of spoken lines each role has. An asterisk (*) before the character's name indicates that this character ALSO has solo or featured sung lines.

Non-speaking roles: 1 Present-day Egyptian (can be played by same actor playing Ammit.) The three Handmaiden parts are also non-speaking. The Handmaidens and the other 9 characters listed above that are asterisked but show "0" lines have NO spoken lines but DO sing as soloists or in small groups.

"Thank you very much for composing such a brilliant work. The children were learning so many new facts about the Egyptians as well as having fun."

""The Glint of Gold" was a great success and much enjoyed by the children and parents. The format of the booklet and the ideas for scenery and music on the CD made the production very manageable."

"I think that the songs are amazing. The 'Egyptian Counting Song' went around my head for days after I heard it. It was very good. "

"Absolute amazing performance to put on. Easy to make props I think it is a brilliant production!!! "

"It was good fun to put on and the catchy tunes helped the children learn the words to the songs. "

"Strong tunes help the musical pass its message on. The whole theatrical form, from building the sets and costumes, to acting out the songs created an environment for educational improvement. What's more we all enjoyed it and it was easy to put on. "

"I have been putting on plays for 10 years and this has been the best. The music was fantastic; easy to learn with catchy tunes. Thank you. "

00:00 Track title 00:00
The Storytellers
The Boy King
The Old God Counting Song
The Egyptian Pyramid
Queen Of The Nile
Osiris (King Of The Dead)
Point To The Stars
Tut Tut!