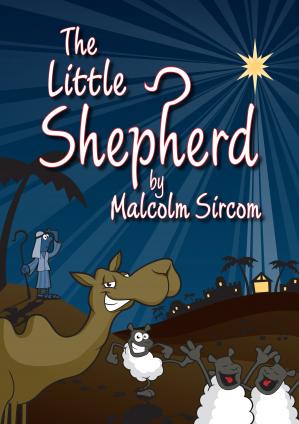 The story of David, a shepherd boy, who desperately wants to see the baby Jesus. Eventually his wish is granted after many incidents and distractions, including meeting the Three Kings and the Three Wise Men! This lively script views the nativity story from a child's angle and has many humorous moments - Doris the dancing camel and four rebellious sheep among them. Even the Wise Men would be pushed to make the top stream... There are 49 speaking parts for ages 7 to 11, which can easily be reduced if necessary, as well as a choir. Starting and finishing with a carol, there are some half dozen catchy, original songs during the action.

As the show opens with the traditional carol 'While Shepheds Watched Their Flocks by Night' the narrators enter and set the scene before the play moves swiftly into action. David, a young boy is desperate to become a shepherd like his father, so when his mother tells David to take supper to his father he jumps at the opportunity. However, its quite a shock (a happy shock no doubt) to David to find that watching sheep involves endless rounds of card games? 'Learner Shepherd' follows as the shepherds introduce David to the necessary skills required for watching sheep and his father presents him with a sheepskin waistcoat.

Everyone is soon distracted by the shining star that is directly above the field and 'Star of the Night' is sung as they ponder about its message. However, everyones thoughts are put on hold as a strange sound is heard from no where and people panic, running back to their homes. Yet David remains unfazed as he comes face to face with an angel and the cowering shepherds sit up in order not to miss out on the fun! 'Glad Tidings' is sung as the angel tells the shepherds of the Son of God who is going to be born tonight. Eager to witness such a tremendous event, the shepherds rely on David to look after the sheep as they set off to Bethlehem.

If David hoped for a quiet first night looking after sheep then he should have thought twice! His first visitors are three kings who have trouble getting an obstinate camel to move. Luckily for them, David has a country and western streak hidden in him as a simple ?Yee-ha gets the camel not just moving but tap dancing! The young shepherd is rewarded with three gold coins for his efforts. As the kings continue on their way, 'A Long, Long Road' is sung. However trouble starts to brew as the sheep decide to take advantage of the elder shepherds absence and as they decide to escape, to discover if the grass is greener on the other side, 'Lets Boogie' is bleated in style!

The Wise Men are the next people to ask for Davids assistance as he points them in the right direction to the stable. 'Brains' is sung by the Wise Men as they admire their own intellect. Starting to feel left out of the nights events, David sings 'Missing It All.' As the star starts to fade, the Angel reappears and tells David of his missing sheep, David wastes no time in setting off to find them and bring them home.

Back at the stable, Mary and Joseph are not left alone for long as the visitors start to arrive to present the Son of God with their gifts and 'Boy Child' is sung as they shower him with praise. However, spirits are not high for long as the Angel makes one last appearance to warn Mary and Joseph of King Herods plans to slaughter all new-born children in Judaea. Yet all is not lost, as David makes it to the stable in time to see Jesus and his generous gift of the waistcoat to keep the child warm delights Mary and Joseph as they promise that God will be with him.

As the shepherds return to their field, they are angry to find David gone along with some missing sheep. However, like most children, David returns with a ready prepared story to explain his disappearance, but this time, his excuses are accepted by his father who is proud of his sons dedication towards returning the missing sheep and his generosity towards Mary and Joseph. 'The Son of God' ends the show as the cast celebrate.

Non speaking roles: A choir of twenty singers (seated off- or onstage at director's discretion and depending on space available) and a chorus of six sheep (Scene two).

Non speaking roles: A choir of ten singers (seated off- or onstage at director's discretion and depending on space available).

""This Nativity has got the lot; great songs, great humour and a VERY simple set.""