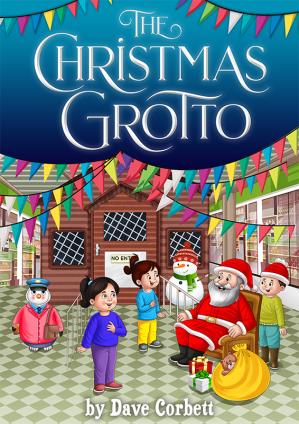 The main roles for this show are best played by Key Stage 2 pupils, though there are ample smaller parts for Key Stage 1 pupils, making it ideal for small school productions.

It's Christmas time at a large department store and Stevie, Annie and Polly are queuing outside Santa's Grotto with their mum.

While little Polly waits patiently, Stevie and Annie are up to mischief and upsetting the store's agitated assistant.

While Mum dashes off to buy some crackers, the children are called for their turn and they excitedly enter the Grotto. Unfortunately, Stevie's mischievous behaviour continues as he tries to pull Santa's beard off!

After a stern telling off from Santa and with the store assistant approaching, they grab poor Polly's hand and make their escape through a door marked 'No Entry' which locks itself behind them.

A magical world greets them on the other side but little Polly is scared and wants her mum. With no way back through the door, they must find another way back to the Grotto.

Along their strange adventure they meet lots of festive folk, penguin posties and abominable snowmen who are very naughty indeed!

Will the children find their way back and will they learn their lesson?

The opening scene is set in a department store at Christmas time. Three children are excitedly waiting with their mum to see Santa in his Grotto.

While little Polly waits patiently, her older siblings Annie and Stevie become bored and begin to cause mischief to the annoyance of the shop assistant.

After being ushered back to the queue by their mother, the trio soon enter the Grotto while mum dashes off to buy some crackers.

As Santa warmly welcomes them, it soon becomes clear that Stevie is still in a mischievous mood and tries to pull Santa's beard off!

With the store assistant fast approaching and a telling off from Santa, the children escape through a door marked 'No Entry' with a very upset Polly.

On the other side of the door, Stevie gloats about their escape while Polly just wants her mummy. His boasting soon stops as the children realise that the door has locked behind them and they appear to be at some kind of party.

When they hear footsteps approaching, the puzzled trio hide under a table before a host of festive characters enter including Snowy the Snowman, Bruce the Spruce and Flaky the Snowflake.

The characters sit around the table and discuss Flaky's questionable taste in food before Polly calls out for her mum from under the table and, discovered, she and her siblings sheepishly emerge.

The children apologise for 'gatecrashing the fancy dress party' before asking for directions out of the store. The festive friends look just as confused as they explain that they are, in fact, in Santa's Place!

They advise the children to visit the Posties via the second class staircase as they may be able to help them.

Annie, Stevie and Polly enter a mail-sorting room with large piles of letters and some very busy penguins sorting through them.

Convinced that they are in the fancy dress department, they ask the 'Posties' how they can get back to the Grotto.

Unfortunately, the playful penguins seem more concerned about their break and again direct the children to the second class stairs.

Tired, hungry and now all wanting their mum, the children take a rest from climbing the stairs and settle down to eat a bag of sweets.

Before long, several animals enter and curiously inspect their weary visitors. Again, thinking that they are in the fancy dress department, the children direct the creatures down the staircase.

The next strange group the children encounter are some VERY abominable snowmen who seem more intent on winding them up than helping them!

Angry and frustrated by the snowmen's rude behaviour, Stevie encourages his sisters to continue on their journey up the staircase.

Father Christmas is soundly asleep on a chair in his living room before Mrs Christmas enters in a fluster and wakes him.

It's two o'clock and he was due back at the store at one o'clock... Santa's overslept!

After a knock at the door from the Posties to tell him about the children, Santa hastily grabs the key to the 'No Entry' door and heads back to the store.

An angry Mum and store assistant are making their way across the store to the Grotto.

The assistant explains to Mum how the children had run through the 'No Entry' door which leads to a little broom cupboard that Santa affectionately calls 'Santa's Place' and that the door had locked behind them. She/he then reassures her by telling her that Santa has gone to the office to retrieve the key.

Moments later an out of breath Father Christmas appears with the key, unlocks the door and Stevie and his sisters tumble through it.

While little Polly is overjoyed to see her mummy, Stevie is greeted by stern words and made to apologise.

Eager to know more about the 'Fancy dress department', Annie asks Santa if anybody can attend the party downstairs. The store assistant scoffs and informs her that they have only been in Santa's broom cupboard for one minute!

With Stevie's obvious regret for his behaviour and having learned his lesson, Santa assures the children that their Christmas wishes will still be fulfilled.

No additional Customers required for this reduced casting.