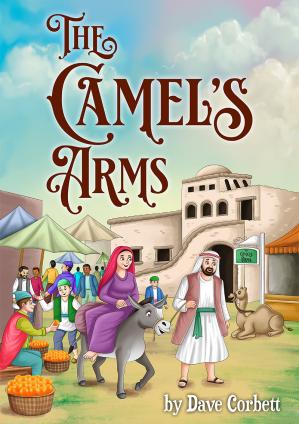 Although this show is very adaptable and will suit mixed infant/junior groups, we do recommend that the main characters are played by older children.

Featuring the family who run 'The Camel's Arms' Inn in Bethlehem, this musical has seven fantastic easy-to-learn songs and all the elements of a traditional nativity, along with a generous helping of humour throughout - and a starring role for the non-speaking sheep! Maaaiirvelous!

Perfect for children aged 5 - 9. Although this show is very adaptable and will suit mixed infant/junior groups, we do recommend that the main characters are played by older children.

Prologue and Scene One Inside a Bethlehem Inn

After the Narrators have introduced themselves, the company sing the rousing opening number Things About A Camel (lots of interesting facts to learn here) then we move inside 'The Camel's Arms' to find Danita (the innkeeper's wife) rushing to get everything organised; with all the rooms taken, there is such a lot to do! While she prepares to wash the floors, she gives Tamir (the innkeeper) instructions to tidy up and asks her children, Asaf and Naomi, to go to the shops to buy food to take to their elder brother Roi, a shepherd working on the nearby hillside.

At the busy market they buy fresh cheese, figs and goats' milk during the cheerful song A Bit Of What You Fancy.

Scene Two On The Way From 'The Camel's Arms

On their way to the hillside where Roi is working, Asaf and Naomi meet Joseph and Mary on their way to Bethlehem for the census. Joseph asks if they can recommend a place to stay, so the children tell him about 'The Camel's Arms', but warn the travellers that the town is heaving with visitors. They say 'goodbye' and hurry off to find Roi, while Mary takes a short rest as she is very tired and is worried that her baby will be born soon. Joseph reassures her in Here For You, a beautiful song which will tug at the heartstrings of your audience.

Scene Three No Room At The Inn

Mary and Joseph arrive in a crowded Bethlehem and realise they have forgotten the name of the inn Asaf and Naomi gave them. They ask a couple of locals for help. There seem to be an amusingly bewildering number of camel-related inn names, but eventually they are directed towards 'The Camel's Arms'. However, their chances of getting a room are low because of the extra visitors who have come for the census! Cue the song There's A Census, sung by all. At the inn they are about to be turned away by Danita, when Mary mentions the imminent birth of her baby, and is then offered the use of the stable as long as Tamir cleans it up!

Scene Four Weary Kings; Not Too Far Now From 'The Camel's Arms'

Meanwhile, just outside Bethlehem, three journeying kings seeking the birth of a new king complain of having trouble with sand in their turbans, in their shirts, in their sandals and in their eyes. They can't cope with the sand as happily as their camels do! (A throwback to the factual knowledge learned from the opening song.) Hoping their journey is nearly over, they are looking forward to presenting their gifts to the new king, and getting a good wash!

Scene Five On the Hillside Above 'The Camel's Arms'

After a long trek up the hillside, Asaf and Naomi find Roi and are roped in to help the shepherds round up the sheep so they can be counted. The sheep sing their showstopper song Brainless? - plenty of opportunity for comic actions and hamming it up here. Surely the best non-speaking parts in any nativity! (The song could be performed as a chorus number as everyone will want to get in on the act.) What follows is a scene of pure pantomime as Asaf and Naomi tease Roi by distracting him as he's trying to count the sheep. Suddenly the mood changes as a choir of angels appear with the message of a special baby boy born in Bethlehem. The children and shepherds rush off to see him while the angels sing their powerful anthem Gloria.

All the characters assemble for the traditional scene around the crib. Gifts are given, Mary expresses her joy over the birth of Jesus and the show concludes with everyone singing the happy song This Is The Day to celebrate Jesus' birthday.

Non-speaking Roles:
Donkey (Scenes Two and Three) who doesnt have a singing role; four Sheep (Scene Five) and two additional Angels (Scene Five), all of whom do.

(NB: No Camels or Stable Animals in this casting.)

00:00 Track title 00:00
Things About A Camel
A Bit Of What You Fancy
Here For You
There's A Census
Brainless
Gloria
This Is The Day