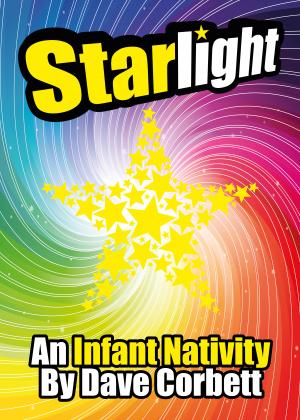 Suitable for the inclusion of "Early Years"

Hints and tips for NQTs

"Starlight" is VERY easy to stage making it suitable for small schools with limited staging facilities.

This would be a good choice for anyone producing an Infant Nativity for the first time.

Hints & tips for N.Q.Ts are included in the script.

The Songs have lovely repetition and one song in particular - "There's a Star" - is an absolute show-stopper.

All your parents will be humming this as they leave ...and for days afterwards.

"Starlight" brings in the "Herod" aspect of the story - your boys will be very engaged.

There are 23 speaking roles and a solo song for Mary.

You can cast as many extras as you like as the script allows for this with roles for Guards, Angels, General Public, Additional Travellers, Attendants, Stars & Market Traders.

"Starlight" is suitable for the inclusion of "Early Years".

Scene One: On a country road going to Bethlehem.

Mary and Joseph meet travellers and see a large star travelling across the sky.

Scene Two: The streets of Jerusalem.

The three kings get lost looking for a baby king.
They ask Herod if he knows where they can find him.

Scene Three: The streets of Bethlehem.

Mary and Joseph look desperately for somewhere to stay as market traders sell their wares around them.

Scene Four: On the hills above Bethlehem.

The angels tell the shepherds of the baby lying in the manger.

Scene Five: In the stable.

Kings and shepherds come to see the baby

"Such a delightful show with beautiful music and simplicity. Thanks for the chance to be able to adapt it so that all 94 Year 1 children had a speaking role even if it was small. The Kinder classes are looking forward to their turn to shine next time, but they loved supporting all the singing and getting dressed up. Parents just loved it - what more can you say?"

"This was SO easy to stage."

00:00 Track title 00:00
Starlight
Do You Know
There's A Star
My Little One
First Ever Christmas Day