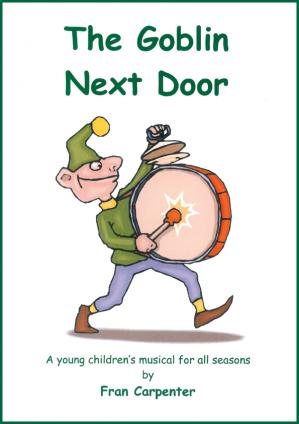 "What a super show, with lots of parts for everyone."

A Children's Musical for All Seasons

A key stage one musical production

With a citizenship/PHSE theme, it tells the story of an obnoxious, noisy goblin who moves next door to the gentle folk of fairyland, causing mayhem and trouble. Can he be persuaded to leave? Or will he see the error of his ways and turn over a new leaf?

Your children will have great fun singing the humorous songs and acting and dancing as the fairies, elves and woodland animals who have to put up with the rude and nasty neighbour!

Unfortunately the peace is soon disturbed by the unaccounted for arrival of the Goblin Man. Observing that the finest house in Fairy Dell is for sale, he does not hesitate to walk straight in and locks himself away in order to cause trouble for his fellow neighbours. 'The Goblin Man' is sung and a few cackles wouldn't go amiss to reveal his wickedness...

Moving swiftly on, the atmosphere changes completely as the young pixies and fairies are enjoying a birthday party. Fun and games follow including Musical Toadstool and 'Have You Ever Been To A Fairy Party?' Unfortunately, just as the youngsters are about to enjoy Pass the Pixie Parcel the Goblin man makes another surprise entrance and acts as a twenty first century gatecrasher! Luckily, the damage is not too bad, but he does ruin the games and eat the birthday cake which is bad enough in Fairy Dell... 'Goblin Man (Reprise)' follows.

In the following scene, Snowdrop and Blossom attempt to collect money for the elderly fairies and pixies, and whilst they receive generous donations from everyone, all the Goblin Man offers is two bags of rubbish. A reprise of 'Goblin Man' is sung as he enjoys tormenting the neighbours.

Yet spirits are still high as the Fairy Dell Ball approaches. The woodlands are decorated beautifully and everyone is excited, even the naughty goblins attempt to join in the festivities. However, as if you hadn't guessed, the Goblin Man ruins the music by banging a loud instrument that pierces your ears. Before long, the guests begin to filter off until he is left on his own. Despite his best attempts to convince himself he can have fun on his own, it isn't long before the Goblin Man breaks down in tears. Luckily, he is noticed by Squirrel who teaches him how to be a companion in 'Good Friend.' After a sincere apology to everyone, the Goblin man is a reformed individual and everyone joins in to sing 'All's Well That Ends Well!'

"The children (and teachers) never tired of this show. A perfect story setting for our Year 2 children. Many comments from staff and parents complimenting the show and the parents were cheering at the end. A real gem."

"What a super show, with lots of parts for everyone. Our cheeky goblin was so perfect for the part! The parents thought it was wonderful."

"..the performance of the Goblin Man was a great success..."

"The children loved dressing up as the pixies and animals... they enjoyed the songs very much."

00:00 Track title 00:00
What A Great Day In The Woods
Lord And Lady Wood-Pidge
Goblin Man!
Have You Ever Been To A Fairy Party?
Good Friend
All's Well That Ends Well!