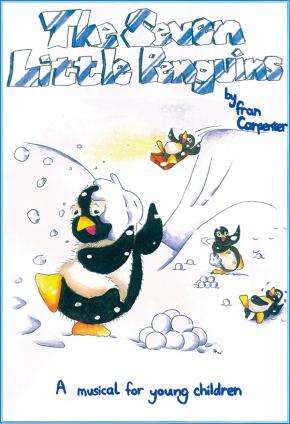 Another Key Stage One musical production

On this particular day young Goggles becomes upset at being left behind by his brothers and sisters. They cheer him up with his favourite sardine ice cream, and go off fishing.

But whilst they are away, Goggles has unwanted visitors - Snitch the Snow fox and Nick and Nock the Polar Bears, the notorious local robbers! Goggles hides as the robbers fill their sacks with goodies.

When they have gone, Goggles goes to tell the other penguins, but they are nowhere to be found. All he finds is a beautiful shoal of fish and a whale dancing magically beneath the ice! He decides to find the robbers by himself and bravely sets off into the snow.

Later, the other penguins wonder where Goggles has gone and enroll the help of PC Blubber, the "limerick-speaking" walrus policeman.

Goggles discovers a creepy cave and has fun listening to his echo, not realising that it is made by the mischievous icicles playing musical games.

Goggles eventually finds the robber's lair but is soon discovered by them! Just in time the icicles appear and capture the robbers, forming icy prison bars around the penguins. Icicles and PC Blubber all celebrate with a song and a dance.

The penguins introduce themselves in 'Seven Little Penguins Are We!' with musical interludes in between for a short, charming dance routine. Goggles, the smallest penguin, is not allowed to go fishing with the others and in 'Oh Goggles, Don't You Cry!' the remaining penguins try to stop his tears with no end of treats; ice cream eventually does the trick!

Keen to amuse himself whilst the others are out, Goggles sings 'Funny Little Song' to himself as he busies himself tidying the igloo. Unfortunately, his fun and games are interrupted. Goggles hides from three robbers as they enter the igloo and during 'Grab This, Grab That!' Nick, Nock and Snitch empty the igloo of all its luxuries. Worried about letting the others down, Goggles leaves a note for his friends, puts on a brave face and during a shaky rendition of 'Funny Little Song' leaves the igloo to follow the robbers.

Upon finding Goggle's note, the six penguins worry about what their small friend has got himself into. However, all is not lost as PC Blubber makes an appearance and during 'PC Blubber' spirits remain high as everyone is convinced the great walrus detective will save the day!

No sooner than Goggles leaves the comforts of his home, he finds himself in a spooky cave surrounded by icicles; 'Song of the Icicles' follows. As Goggles makes his way further into the cave in search of the robbers, he sings 'Funny Little Song' once again to calm his nerves. Upon seeing the robbers, Goggles hides behind an icy boulder but he underestimates their sense of smell, as they sniff out the smell of penguin! Luckily, the icicles surround the criminals forming a circle of icy 'prison bars' and PC Blubber and the other penguins enter just in time to see the heroic icicles in action. Everyone celebrates a triumphant ending in a reprise of 'Seven Little Penguins Are We!'

"We loved it and do you do any more?"