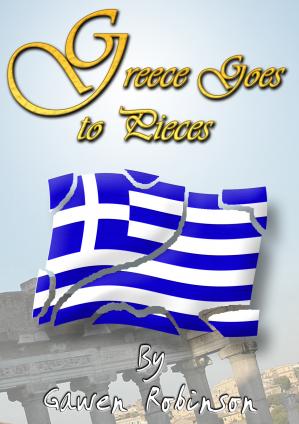 With nine memorable songs on a fully orchestrated CD (including backing) and a colourful humorous script, "Greece Goes To Pieces" can be performed as a full musical production, a shortened assembly piece or as an invaluable classroom teaching resource.

The story is set in Athens around the year 400 BC. It is centred around an ordinary pot maker named Peta who introduces us to many of the famous scholars in Athens around this time such as Socrates, Plato, Hippocrates and Aristophanes. Peta Potter's pots (try the tongue twisting song if you dare!) tell many stories and we are transported for a while to Crete to see a mini play featuring the legend of Thesius and the Minotaur.

Despite its wealth and splendour, Athens is going through a bad time. The Athenians have recently been defeated by the joint Spartan and Persian armies and now have to put up with foreign interference. The Spartans, being warriors, are very different in nature to the Athenians and have little time for culture and philosophy, so there is a tension in the streets between the two sides. Anxious to find out what is in store for their great civilisation, Socrates, Plato and Hippocrates set off on an exciting journey to see the great Oracle at Delphi visiting the Olympic games on the way. The Pythia tells them to seek advice from Zeus himself at the great statue in Olympus where they will discover their destiny.

"Greece Goes to Pieces" brings history to life in this Key Stage 2 musical. During the overture, the background to the musical is set and a brief historical overview is shared with the audience; the year is 400 BC and the Athenians have lost the Persian War.

The following scene sees Peta the pot maker setting up his stall filled with colourful pots and vases with historical figures painted on them such as the Greek goddess Aphrodite and the heroic Hercules. 'Peta Potter' follows during which the chorus sing his praises and marvel at his pottery. Unfortunately the lively atmosphere quickly disappears as a group of Spartans and Athenians enter the vicinity and mock one another callously; 'The Peloponnesian War' follows as both groups defend the people of their city. The quarrelling that breaks out sparks up one of Peta's memories; it is the ancient Greek story of Theseus and the Minotaur. As Peta recalls the tale, the legend unfolds on the stage followed by a song which ends Peta's tale with a bang...

Following this story things start to get serious when the Greek Philosophers enter. Well, they would if it wasn't for Aristophanes' attempt to share ancient Greek comedy with the audience! 'The Philosopher's Song' follows during which the ancient figures share their thoughts with the audience which, as you can imagine, stretches a few brain cells!

Eager to find out the destiny of Athens after the Peloponnesian War appears to have torn it to pieces, the three scholars decide to journey to the Oracle to seek the answer during 'The Oracle at Delphi.' As they listen to Apollo's words of 'Doom for Athens and Greece' the scholars decide to journey onwards to seek advice from the Gods at Mount Olympus. Before they head off, the scholars are able to catch a few races at the Olympic Games, but seeing the Spartans win again they are quick to leave for the temple of Zeus to seek advice. During the following song 'Zeus', the King of Kings takes centre stage (and a microphone!) and tells the story of Ancient Greece to the philosophers. With the future of Ancient Greece revealed, the cast come together to sing 'Dancing Round the Mountain.'

This musical is ideal for children studying Ancient Greece in their curriculum or for those who just enjoy bringing history back to life with words, music and costume!

"I did this as a Year 6 leaver's assembly and the songs (especially "Peta Potter", which I mastered eventually) and the comedy was brilliant, too. "

"I was one of the many children acting this play in year 6. The songs were fun and the story was brilliant. I would recommend this play as it is modern and the Minotaur scenes are fun to act out. "

"Performed the play for the second time as end of term/ topic production. As it came naturally out of our history work it wasn't a burden like a lot of Christmas plays tend to be. Children and parents were very enthusiastic. "

"This show went down a storm and really put across the Greeks' topic in a powerful and interesting way. The CD gave us the flexibility to add in live music as well as recorded. "

00:00 Track title 00:00
Overture: Greece Goes To Pieces
Peta Potter
The Peloponnesian War
Theseus And The Minotaur
The Philosophers Song
The Oracle At Delphi
Reach For The Heights
Zeus/Greece Went To Pieces
Dancing Round The Mountain