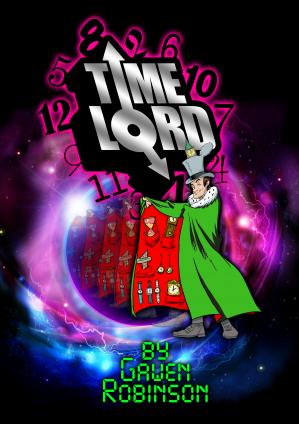 Both these CDs include Overture, ALL Songs, Special Effects, Play Ons and Play Offs in the order you need them enabling production and direction to take place without specialist musical expertise. However - for those of you who prefer a live pianoforte accompaniment, we now have available a superb BRAND NEW Performance Piano/Vocal Score which encompasses Overture, ALL Play Ons and Play Offs, Songs, Link Music, Cues and Chord Symbols. (Grade 5 standard).
We also have available a BRAND NEW Rehearsal Piano/Vocal Score (Grade 2 / 3 standard).
Check them out on the "Script and Songs" heading.

The "Villains of the Piece" in "Time Lord" are described in the script as "Dinopods"(reptilian) but feel free to cast them as Aliens, Humanoids, Dinosaurs... whatever tickles your or your children's fancy.

Imagine what it would be like to travel back in time; to be able to visit any historical figure you liked from any era... Unbelievable?

The "Villains of the Piece" in "Time Lord" are described in the script as "Dinopods"(reptilian) but feel free to cast them as Aliens, Humanoids, Dinosaurs... whatever tickles your or your children's fancy.

"I'm playing Lord Emit currently, we're still rehearsing, and I'm really enjoying it. This has made me so happy and less nervous about attending secondary school. I highly recommend this play."

"Wow! What can I say? I played Lord Emit in this play last year and was stunned by the ingenuity of the playwright. The greatness of my drama teachers brought to life all the adult jokes (extremely funny), children's jokes and coming up with dances that really fit the performance. Thank you Musicline for providing such a wonderful opportunity!"

"I did this play with my Year 3-4 class last summer, and it was such an excellent production: the script is funny, the songs are really catchy, and the story really captured the imagination of the children. I really recommend it."