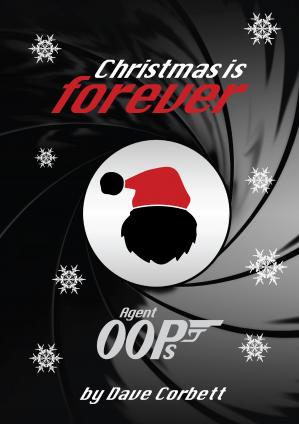 Great humour that children will love

The Rehearsal Score is Grade 5 standard. We normally supply a full "Performance Score" with our musicals but because "Christmas is Forever" uses a large number of special effects in the orchestral "007" backing tracks which are impossible to replicate on a piano we recommend that you perform this musical using the CD.

Jane Blonde, double 'O' PS (OOPS!), licensed to do whatever, goes to rescue Father Christmas from the clutches of the evil Scarymonger.

His cunning plan is to flood the Christmas scene with counterfeit Santas who are SO nasty that nobody will ever want Christmas again. All this because Scarymonger did not get presents when he was a little boy... but then he was a very naughty little boy!

Christmas Is Forever is an exciting production with a James Bond connection - expect all your old favourite 007 type characters!

The story line combined with some truly inspirational songs with touches of Madness and the Bee Gees, makes it incredibly appealing to pupils... especially the boys!

Enter Ernie and his two fellow Elves who, after a slight spat about their costumes, comically introduce Scene Two.

Scene Two: The Office Of MI6

Santa's been kidnapped! Y and his intelligence officers call on the infamous Jane Blonde, double 'O' PS to rescue Santa from the evil villain Scarymonger and return him to his hideout at the North Pole. With children all over the world depending on her, Blonde must begin her mission to save Christmas.

Blonde sets off to the MI6 gadget lab to get some kit to help her on her quest. Agent U and Agent K demonstrate their latest inventions (CS Hairspray, poisonous nail varnish and trainers that send Morse code) using their unfortunate lab assistants.

Two Henchmen drag Santa into Scary's lair and tie him to a chair. It soon becomes clear that Scary's desire to destroy Christmas stems from having never received any presents as a boy... .a very naughty boy! As Four Substitute Santas and demo children enter we discover his dastardly plan. Replacing the real Santa with such nasty substitutes will ensure that Christmas is doomed forever!

Agent Y visits Santa's Elves to inform them of Santa's kidnap. It is decided that a lady Elf named Emm should be in charge while Santa is 'temporarily indisposed'. The Elves soon become even more dejected when it's apparent that Emm literally can't fill Santa's boots and it looks like Christmas is done for.

Blonde makes a dramatic entrance into Scary's Lair to discover a line of Santas all tied to chairs, but which is the real one? With all of the Santas claiming it's them, Blonde becomes frustrated and tearful before Scarymonger orders his Henchmen to capture her. Can it get any worse?

When the news of Blonde's capture reaches the MI6 officers they have no choice but to call in their last resort... the O'Connor twins. They may have retired years ago and Ollie O'Connor has put on some weight and grown a white beard but Y has a cunning plan! The twins are rushed to wardrobe where they are transformed into yet another Santa and his Elf.

Back at Scary's lair we see Blonde and the real Santa still tied to chairs and things are not looking good! Enter The O'Connor twins in their disguises claiming that Scary has made a mistake and in fact, they are the real Christmas duo. As chaos and confusion ensues the O'Connor twin dressed as Santa pulls out presents from his sack for the Henchmen and Scarymonger. Overwhelmed by his first ever gift, Scary breaks down into uncontrollable sobs and the prisoners are released. Christmas is finally saved!

Non speaking roles: Substitute Santa 3 and a Pantomime Reindeer (either 1 or 2 actors).

"The kids loved it and so did I. The parents found it fun thank you Dave Corbett "

"I cannot compliment this musical enough! The script is hilarious and the children really enjoyed performing the show. The content is perfect for children and adults alike. In particular, the children and I adored the songs. They are well written, catchy and fun. We had a very small budget and found the costumes and props very easy to source. The stage directions were clear and overall the script required very little tweaking. Of course, some elements need to be changed but the show is very flexible and easy to adapt to meet your needs. All in all, I would highly recommend this show. It really is lovely! Thank you Dave Corbett! "

"Just so magical and a good play to put a lot of smiles on year four's faces. Also a good play because it's a good way to express happiness "

"Full of humour for both children and adults. We got lots of positive feedback from parents who went away humming or singing the songs. "