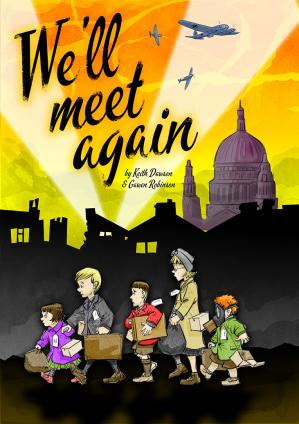 Finally, we jump forward to 1945 and VE Day. Children and parents are re-united once more as the show closes with the title song - "We'll Meet Again".

The following scene occurs at a railway station, and after Chamberlain's speech persuading parents to send their children to the country, a number of interactions between families follow. 'Now it's Time To Say Goodbye' is sung and the emotional exchanges are deep as children are desperate to stay behind. Finally, the children arrange themselves in lines ready to embark on their 'adventure' and 'Now It's Time To Say Goodbye' is reprised.

The following scene sees two evacuees, Terence and Ronald, discuss their new homes with little enthusiasm but try to keep their spirits high during 'Life Goes On.' After a few teasing comments from country kids, the children play together happily whilst an evacuee, Margaret, attempts to write a letter home during 'Dear Mum And Dad.'