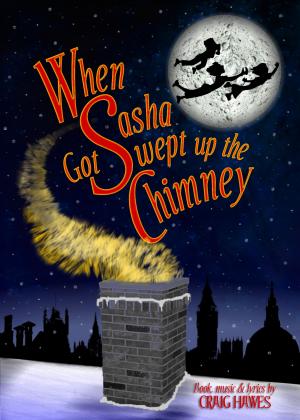 This can be reduced to 24 speaking roles. See "Casting" heading or "Production Notes" in Script Sample.

No pianist required! Both these CDs include Overture, ALL Songs, Special Effects, Play Ons and Play Offs in the order you need them enabling production and direction to take place without specialist musical expertise.

From the writer of "ZOOM!" comes the most magical of Christmas musicals - "When Sasha Got Swept Up The Chimney". This festive show follows a young orphan, Sasha, as she and her friends are mysteriously swept up the orphanage chimney thanks to a sprinkle of magical stardust. But this is just the start of a thrilling adventure that will take them all the way to the North Pole, and change their lives forever! However, all is not well in the Frozen North and when Christmas is threatened by an evil Tooth Fairy, it's down to Sasha and her friends to save the day!

Sasha is a spectacular show that will take your audience on a magical sleigh ride and have them laughing, crying, singing, dancing and feeling fabulously festive! This wonderful Christmas story is brought to life through a sackful of unforgettable songs, a deliciously funny script and a tear-jerking ending that won't leave a dry eye in the house! With parts for between 20 and 40 children, unlimited chorus parts and the possibility of adult performers guest starring as Berty and Gerty Claus, this show will suit any size school or group.

A CD of vocal tracks is also available which can be used for rehearsals and performances.

'The Mistletoe Ball' sets the scene in Victorian London as Londoners are preparing for the festivities. Unfortunately, the mood in Stoneheart Orphanage is not as bright as Harriet does her best to convince Milly, Sasha and Will that Santa doesn't exist. However, failing to lose sight of her dreams, Sasha sings 'Someone Somewhere' reassuring herself that one day her dreams of a family will come true.

Ignoring Harriet's hurtful comments, Will and Sasha help Milly to send her letter to the North Pole, but in an unexpected turn of events they get swept up the chimney along with the letter! It is certainly a change of scenery as the children are transported to the rooftops where despite the cold, Tom, the chimney sweep, finds the energy to sing 'Clean Sweep.' Quickly making friends, Tom offers the orphans the chance to deliver their letter in person, and without hesitation in a reprise of 'Clean Sweep' the children are swept away to the North Pole.

Everything is underway at the North Pole as Holly and Ivy, the two cleaners, are going about their daily tasks. Yet their talk is full of bitterness as they resent the fact that two fairies should be demoted to cleaning when the 'new kid on the block' is promoted to the role of the Tooth Fairy. It seems as though there are even hardships in the North Pole!

Stumbling over the North Pole (literally...) Tooth Fairy and his side kick Tooth Ache enter and in an evil revelation, the audience discover that their intentions are to ruin Christmas!

However the wicked atmosphere disappears as we are transported to Santa's workshop where the elves are busy putting their finishing touched to all the Christmas presents-including the 822 spinning tops (don't worry, these are not necessary props!) Expecting a visit from the elf inspector, the elves prepare themselves, but Tom, Sasha and Will arrive unannounced and thinking they are the inspectors, the elves do their utmost to impress them, including countless witty one liners. The reindeers make a polished entrance, and it is eventually discovered that Sasha, Will and Tom are here to see Santa and not inspect the workshop. Willing to oblige, the elves sing 'You've Got A Friend In Me' to welcome the guests.

In the House of the Clause's, Santa and his wife prepare for Santa's travels and it seems that even Santa's wife double checks his sack before he leaves! But there's love beneath the banter as they sing 'You've Got A Friend In Me.' However their peace is disturbed as everything starts to go wrong. The naughty and nice book disappears and Tooth Fairy and Tooth Ache start to cause havoc. Harriet makes a surprise entrance, as it turns out she followed her fellow orphans up the chimney, and is swept in to joining Tooth Fairy and Ache, helping them to ruin Christmas.

Despite Christmas appearing to fall apart at the North Pole, Mrs Claus continues her day to day business as she runs the Elf School. Far from well behaved, their antics and jokes drive Mrs Claus round the bend, so even she almost contracts tinselitus! However 'The Tickling Song' puts everyone back into a good mood. Unfortunately this doesn't last long as Tooth Fairy, Ache and Harriet reveal to the audience they have locked Santa in the cellar and stole the stardust distributor so the sleigh won't stay in the air. Blissfully unaware, the reindeers take Will, Sasha and Milly on a complimentary sleigh ride during 'Come for a Magical Sleigh Ride' which ends quicker than unexpected, luckily without any cuts or bruises! At this point, the Tooth Fairy, Ache and Harriet reveal themselves and what they have done, thinking they have successfully ruined Christmas. However, in a passionate speech from Sasha, Harriet realises the wrongs of what she has done and that all she lacked was some belief in Santa. With everything restored, the children return to London and in a happy ending, Will, Milly and Harriet receive private invitation to the Mistletoe Ball where their adoptive parents will be waiting, and Sasha gets the biggest surprise of all when her adoptive parents turn out to be Santa and his wife! 'You've Got to Believe in Christmas' brings a close to a magical journey. 'Magical Sleigh Ride' concludes the show.

Cast members could become an off-stage chorus when not required in scenes.

Some of the children playing the non speaking roles could also perform the 'Stardust Dance' in Scene 8.

# You may prefer to let the Elves remain at their work stations for the introduction to the visitors in Scene 4, so that Elves F and J can come forward to cover the lines of Elves G and H more easily.

"Highly recommended - heartwarming, well constructed, fun, cute moments available - our audiences loved it too! Just the right length for a children's musical if Sasha is on your short list GO FOR IT!!! "

"It's absolutely fantastic and I'm playing the part of tooth ache and I am so excited to perform it!"

"It was amazing to be part this wonderfully produced play. I got to play the part of Ivy and Cupid. It was great fun. My favourite character was Tooth Ache though."

"This year in this play I am playing the role of Holly - and I love it!"

"i saw it in the first year of my school - I'm in Yr 6 and I am Charlie the sweeper and i am so excited. The teachers helping us are Mrs Scott, Mr Simpson, Miss Merylees and Mrs Docherty who are working so hard to make this production memorable and making sure we all have lots of fun. So all i can say is thank you so so much x "

"I really enjoyed this prodution. I recommand this to all schools!!!!! I am playing Tom! I've got lots of lines to learn but they are really easy to learn!!! "

"My school did this as our Xmas play in 2008. I got to play Sasha and it was incredibly fun. I love this play and I really enjoyed performing as Sasha. "

"We are about to perform the second performance of this Christmas show. I recommend this. "

00:00 Track title 00:00
You've Got To Believe In Christmas
Magical Sleigh Ride
The Tickling Song
You've Got A Friend In Me
Clean Sweep
Someone Somewhere
The Mistletoe Ball