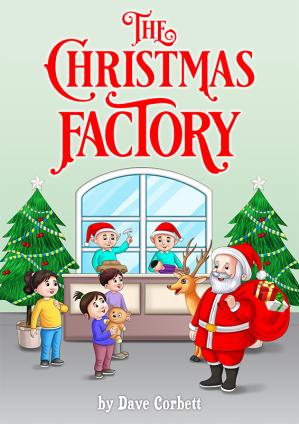 This show is ideal for mixed age range productions, as there are lots of non-speaking and small parts which infants can excel in, while your older pupils can play the main speaking roles.

It's a very cold and frosty Christmas Eve and Lisa, John and Chrissie are full of excitement about a visit from Santa.

As mum tries to settle them for bedtime, Lisa picks up her very tatty teddy and wishes he could be fixed just one more time.

The three children are soon sound asleep until a loud crash startles them and they go to investigate.

There in the living room is Father Christmas himself... a very clumsy Father Christmas who has broken mum's new teapot! There's only one thing for it! Santa must fly back to winter wonderland to get mum a new present.

After much pleading from the excitable trio, the children are soon accompanying Santa on his sleigh along with tatty ted.

At the Christmas Factory they meet a host of comical characters including busy elves, silly snowmen, talking toys and a very famous reindeer with a very shiny nose!

But can they replace mum's teapot and mend poor old tatty ted in time for Christmas morning?

The show opens with the atmospheric song "Cold, Cold Winter", which really sets the scene.

Children dressed as snowflakes glide through a frosty tree scape while Jack (or Jill!) Frost dances about with spiky movements.

A group of expectant children skip happily through the trees on their way home on Christmas Eve.

It's Christmas Eve and a very excited Chrissie, John and Lisa are putting the finishing touches to the Christmas tree with the help of their parents.

Before too long Mum announces it is the children's bed time and Lisa picks up her VERY tatty Ted, remembering when Santa first brought him. With one ear torn, a missing eye and a loose leg, Mum is fearful that he can no longer be fixed. She tries to comfort Lisa by telling her that Santa may bring her a new one but Lisa just wants her Ted!

The family head up to bed and fall soundly asleep until a loud crash wakes the children and they decide to investigate.

The unsuspecting trio enter the living room with Lisa still clutching on to her beloved Tatty Ted and are dumbstruck at the sight before their weary eyes. Santa is standing in their living room!

After Santa shushes the children in fear that they will wake their parents, he apologises for disturbing them and explains that he has dropped and broken mum's present... a lovely new teapot.

John offers to fix the teapot with Dad's superglue but Santa is set on going back to Winter Wonderland to get her a new one as he can get there and back in a flash!

Intrigued by the mention of such a place, the excited siblings plead with Santa to take them with him.

Although it will mean a bit of a squash with 3 extra passengers, Santa agrees and instructs them to fetch their coats.

After a frosty sleigh ride they all enter Santa's Christmas factory where lots of elves are busy working away making toys.

A red racing car catches John's eye as he looks around while Chrissie is quite taken with a baby doll. Lisa on the other hand is still clinging on to her old, worn tatty Ted.

Seeing her close attachment to this beloved but worn out toy, Santa asks Lisa kindly if she would like to get Ted repaired by his elves and she gratefully accepts. They soon head over to the Menders' Workshop which is just beyond the field where the snowmen play and reindeer rest.

Several snowmen and women are happily playing with snowballs in a field, other than one snowman/woman who looks very miserable as they are concerned that spring is only around the corner.

After singing their song, the snow people discover that only one of them has a carrot nose! They head off to the greengrocers, while several reindeer enter discussing how bright Rudolphina's hooter is! Rudolphina however is less than happy about the way she looks until she is comforted by another (very famous) reindeer!

The children and Santa enter the Menders' shop where lots of other elves are busy sewing and glueing toys.

One of the Mender Elves approaches Lisa and examines Tatty Ted. He may look like he has been through a lot of battles but the Mender Elf assures the visitors that he can indeed be fixed... after all, Santa's Elves can fix anything!

During the Menders' shop song, Ted is taken away to be fixed while various other toys parade across the stage including Soldiers, Fairies and Clowns.

With Ted now fixed and a new teapot for Mum, Santa announces it is time to leave Winter Wonderland.

As they fly over rooftops carols can be heard and a Nativity Tableau forms on stage.

John, Lisa and their parents are back in the family living room eagerly waiting for Chrissie so that they can open their presents.

John opens his first, discovering the red racer he admired in the Christmas factory and Lisa opens hers to discover the baby doll Chrissie had pointed out.

As they discuss the strange events of the previous night and the magical menders that fixed Tatty Ted, Mum becomes amused.

She's been called some funny things before but never Santa's Mender! She was worried she wouldn't fix Ted in time for morning but weirdly, the time just seemed to stand still last night!

Neither the Pantomime Cow nor additional Elves or Dolls will be required.