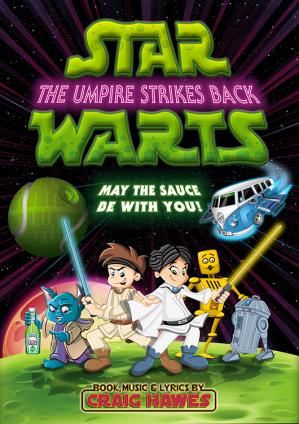 Another BRAND NEW product is the "Dance it!" Choreography DVD. Watch each song performed by a group of age-appropriate children in two different versions - a full speed 'Performance' version and a slowed down 'Step By Step' version with helpful narration to guide you through the dance. Introduced by Craig Hawes, the DVD is also packed with lots of handy hints for teaching dances. Absolutely no previous experience or expertise is needed.

Read the latest "Dance it!" reviews
'The "Dance it!" DVD was great.' St Hugh's Catholic Primary, Lincolnshire.
'For the first time we used the "Dance it!" DVD and found it wonderful.' Rising Starz Performing Arts, New Zealand.
'"Dance it!" videos were very useful.' Sacred Heart Catholic Primary, Hertfordshire.
'Loved having the Choreography (Dance it!) video this year. That really helped our choreographer get the kids started and when she was sick, we could still rehearse their dance moves.' The American School, Marrakesh.
'Loved the "Dance it!" that came with "Porridge" and would love similar for other productions. Makes my life so much easier.' Aria School, New Zealand.

Click "FREE Resources" below then scroll down to "Gallery of Costume Ideas".

Want access to all the songs and scenes?
We also have the full, original, 80 minute version available, click HERE.

Craig Hawes launches his intergalactic musical comedy, 'Star Warts - The Umpire Strikes Back'... and it's out of this world!

In a galaxy far, far away, Luke Warmwater and his aunt, Daft Ada, live a lonely life on their secluded space station, Junction 51. But when Princess Nebula's ship crash lands into Lukes bedroom, they soon learn of the evil Umpire and his dark desire to conquer the universe.

Along with Toby Wonky Nosebleed, Zak Solo and Nigel the Nookie, they follow Princess Nebula in her rebellion. Aboard the Millennium Penguin, they whizz warp-speed through the galaxy to the Umpire's High Tower on Planet Wimbledonia. But little do they know, the Umpire is about to strike back!

Join these galactic goofballs on their space adventure light-years from home as they have close encounters with dippy droids, mad martians, spaced-out Space Rangers and a ferocious pot-plant called Gordon. Can our crazy crew master the power of the sauce to save the galaxy, or will it be game, set and match to the Umpire? Watch this space...

With a cast of cooky characters, hilarious pun-packed script, and six spectacular songs as catchy as a severe case of Star Warts, this meteoric musical has universal appeal! Your cast of superstars will have a blast and your audience will be over the moon!

Star Warts boldly goes where no musical has gone before, so fasten your seatbelts, set phasers to fun and may the sauce be with you!

The musical opens with a very familiar orchestral overture as scrolling text and a deep voice provide a dramatic introduction to our story. A frantic space battle ensues as Princess Nebula's ship is pursued by Space Rangers, then we are instantly transported inside Nebula's cockpit. Nebula and her butler android, Qwerty, are desperate to escape the Space Rangers, but their only option is to crash land on a nearby Space Station - Junction Fifty-One. We see their chase resume as Nebula's ship flies on collision course for the space station and crash lands.

An instant change of scene takes us to the surface of Junction Fifty-One, where Daft Ada Elbow and her nephew, Luke Warmwater, prepare for the imminent arrival of customers. The Trekkies and chorus enter and all sing "Junction Fifty-One", during which we discover more about the delights of this space station and Luke sings of his desire for adventure. We briefly meet visiting characters such as the Diddly Squits and Jelly Nit Apprentices whilst the Trekkies peruse Daft Ada's star wares. Ada sadly reminisces of the day her baby son Dennis was accidentally swapped for a pot-plant called Gordon many years ago by the mysterious Doctor Woo. The Trekkies leave and we hear a loud explosion as Princess Nebula crashes into Luke's bedroom. Luke introduces Nebula and her robot Qwerty to his own droid, R-U-1-2. On meeting Nebula, R-U plays a secret message from her parents who instruct her to get help from Toby Wonky Nosebleed to rescue them and their galaxy. Nebula explains how her galaxy has disappeared, the sphere round her neck being the only thing left from it. She tells of the evil Umpire on Planet Wimbledonia and his dark desire to conquer the Universe. Fortunately, Toby Wonky Nosebleed instantly appears and with the help of magical fingers describes the power of the Sauce and how it may be learned from the Jelly Nit Master, Lord Yoga. The new friends need a fast ship and cool captain, and Zak Solo crash lands right on cue with his first mate and saxophone player, Nigel The Nookie. Together they board the Millennium Penguin to launch their mission, and all enter to sing "Space Trip".

Meanwhile, the evil Umpire is in his High Tower on Planet Wimbledonia practising his sinister, heavy breathing. Along with his first officer Spocky McSpock and his computer assistants, Sira and Alexi, we discover how the Umpire was abandoned as a baby and raised by the Wombles of Wimbledonia. He has taught himself the dark side of the sauce and punishes anyone who breaks his strict rules by shrinking their galaxies into tiny spheres. But when he discovers one missing, he summons his storm trooping guards, the Racketeers, who enter equipped with their deadly ball blasters (very similar to tennis rackets). The three Space Rangers, Roger, Over and Out, arrive with news of Nebula's crash and the sphere she wore around her neck. The Umpire, certain that Nebula has survived, sends the Space Rangers back to capture her and the missing sphere.

Back on board the Millennium Penguin, the male members of the crew are busy playing video games. Nebula and Ada scold them and when the engines fail, it is down to Nebula to fix them. She reminisces about her parents and home and, accompanied by the chorus, sings "In A Galaxy Far, Far Away". Space Rangers Roger, Over and Out then stop the ship to question the crew in their search for Nebula and Qwerty. Toby uses the power of the Sauce to hypnotise the Rangers and send them off singing and dancing. The ship is then invaded by the Diddly Squits, an army of strange aliens who tell of their lost planet, Oxymoron. R-U replays an emergency message from Nebula and Ada who have been captured by the Rangers and taken to Wimbledonia. Luke must travel alone to visit Lord Yoga whilst the others must try to rescue the heroines and defeat the Umpire. The Diddly Squits offer to lend an alien hand and all sing "We Are The Diddly Squits".

Back on Planet Wimbledonia, Spocky McSpock is taking the Racketeers to task when the Umpire receives an update from Sira and Alexi. The Space Rangers have landed but have been followed by the Millennium Penguin. The Umpire orders the rebel ship to be captured in his tractor beam. The Space Rangers enter with great news - they have captured Princess Nebula and Daft Ada, which calls for a celebratory evil laugh.

We visit Planet Pilates in the Tai Chi system, where Lord Yoga's apprentices are scalded for failing their saucy SATS. His aides, Alfie Centuri and Anne Dromeda, announce the arrival of Luke Warmwater who has come to learn the ways of the Sauce. He brings Gordon the pot-plant, who suddenly flops lifelessly in Luke's arms. Yoga promises to use the power of the Sauce to bring Gordon back to life and does just that in the uplifting and energetic song "Squeeze The Sauce".

Back in the Umpire's control room, he has recaptured his foes and condemns their fruitless attempt to rebel as all sing "The Umpire Strikes Back". Nebula and Luke challenge the Umpire to a final battle of bottles, dark sauce against light sauce, and a stylised slow-motion tennis match ensues. The players use their Bling Blades for rackets, but just as the Umpire is about to win, Daft Ada steps onto court and brings the match to an abrupt end. She showers the Umpire in green sauce thus restoring his memory, and Ada reveals his true identity! A regretful Umpire restores Nebula's galaxy and she is reunited with her parents. Doctor Woo returns with baby Dennis, much to everyone's confusion, and is delighted to discover that Gordon's alive! The joyous company celebrate with a reprise of "Space Trip".

In the following list, the number shows the number of speaking lines each role has. An asterisk (*) by the character's name indicates that this characters also has solo or featured sung lines.

With this reduction, some lines will need to be adapted or rearranged, especially where characters are mentioned by name but covered by other actors. 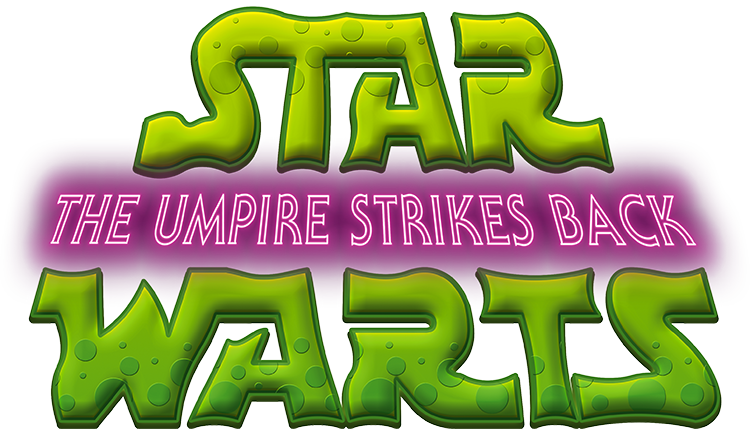 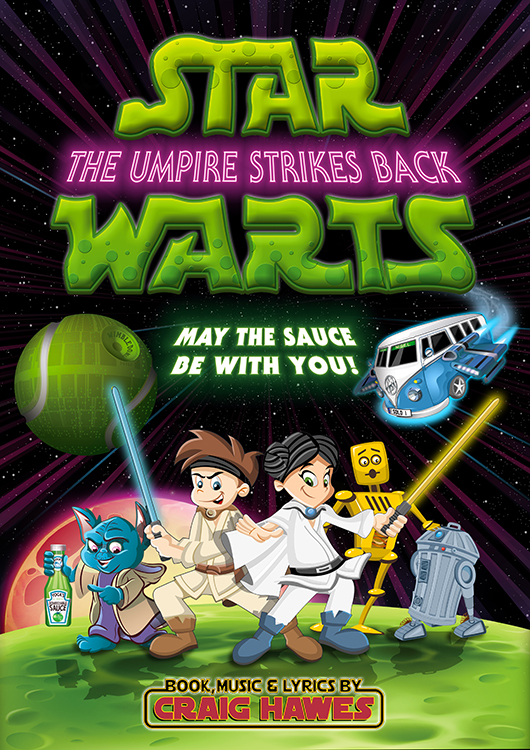 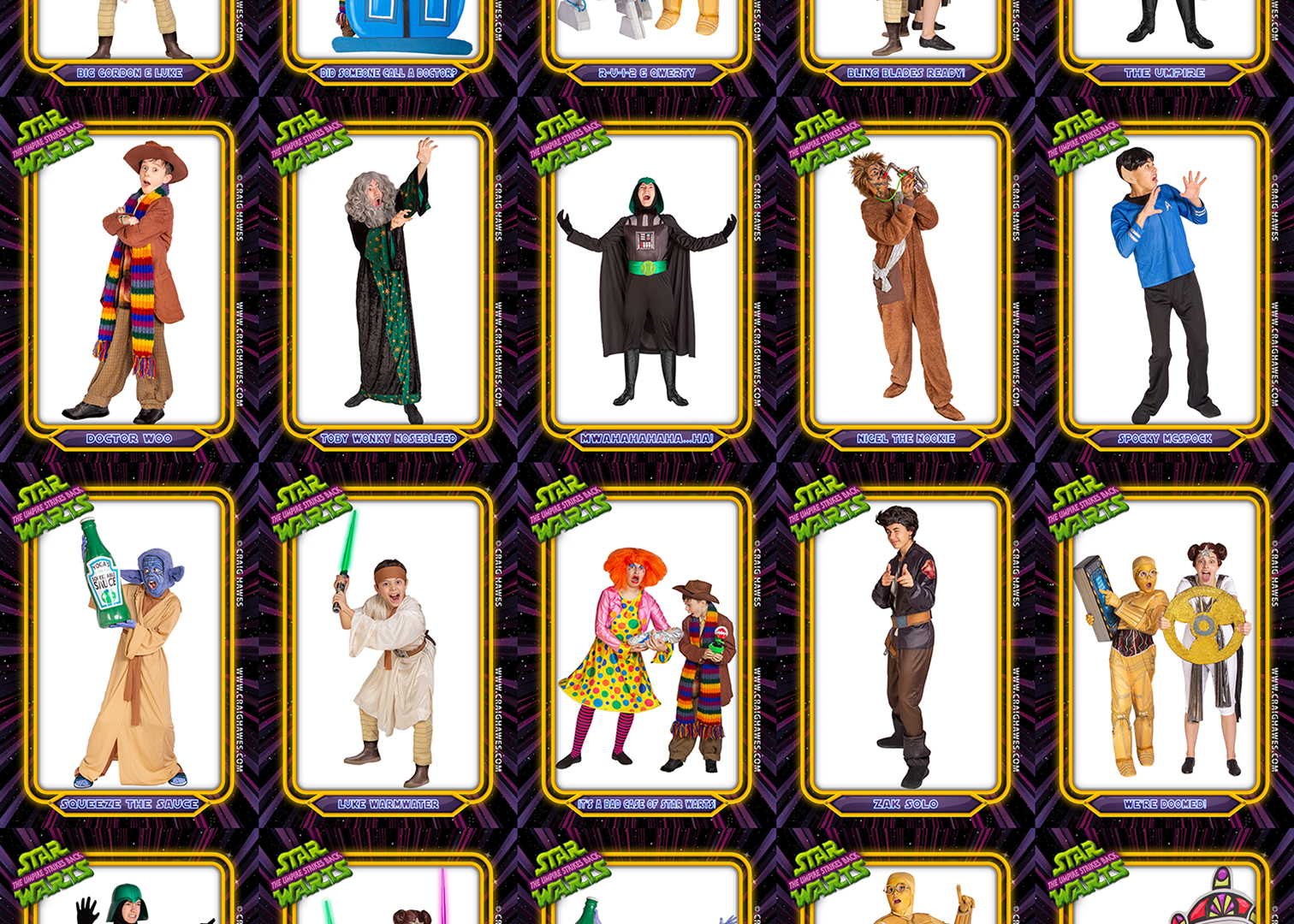 Craig Hawes has provided these fantastic photos to inspire your costumes for Star Warts.
Download .zip 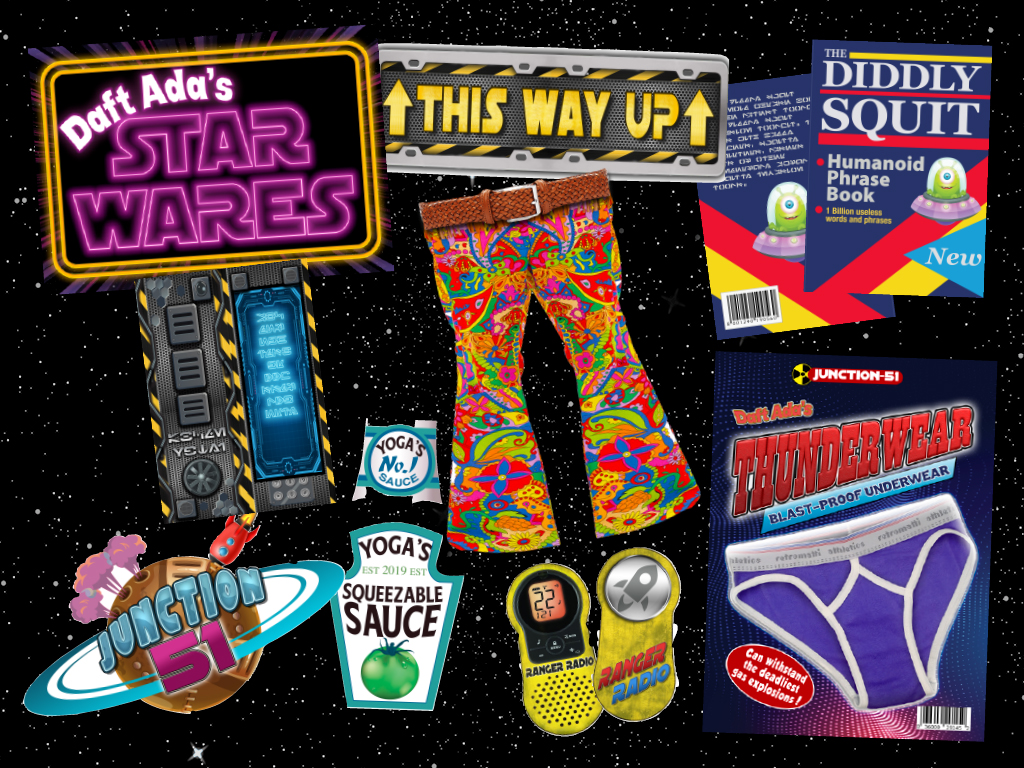 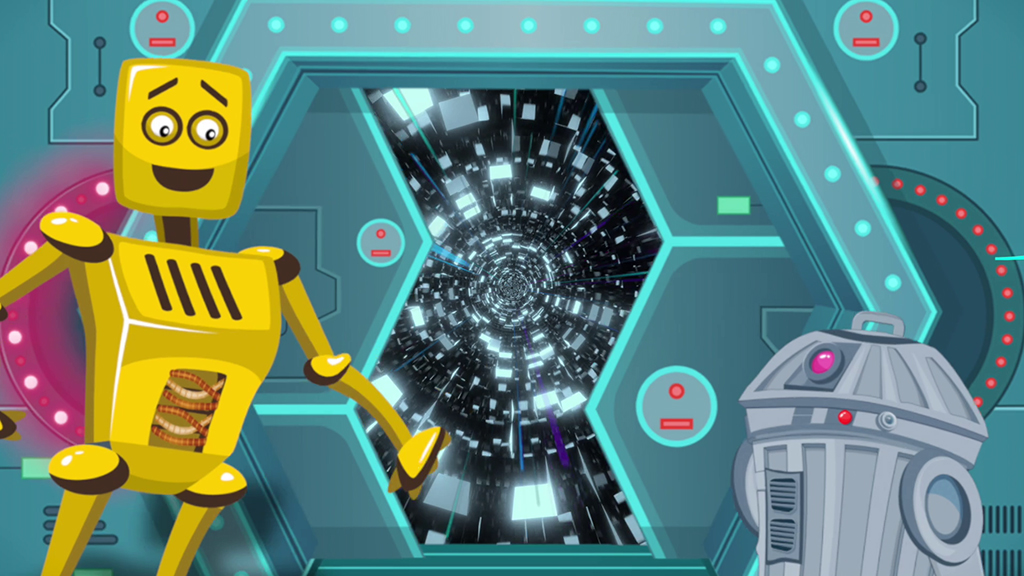 A FREE "Welcome Video" to play prior to your show to welcome your audience and introduce the musical!

Please Right Click the button below and select "Save target as..." (or similar wording) to download the file.

"It is such a good play. I personally loved it. I love that all the characters can be played by either gender. It is amazing. "

"My all time favourite of the Craig Hawes shows... so far! Hilarious script and catchy songs make this an absolute hit with adults and children alike. Our children created memories to treasure after being part of such a brilliant show!"

00:00 Track title 00:00
Junction Fifty-One
Space Trip
In A Galaxy Far, Far Away
We Are The Diddly Squits
Squeeze The Sauce
The Umpire Strikes Back

Additional songs are available in the FULL Version of Star Warts - Click HERE to listen!!