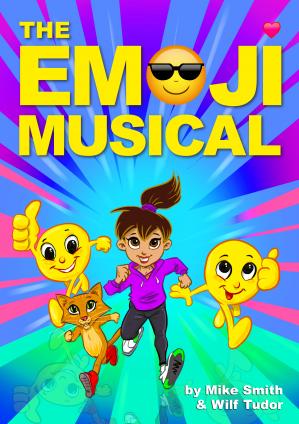 Quick and easy to costume

After Dolly's younger brother, Wallace, requests her help in designing an Emoji themed costume for the village fancy dress competition, she just cannot stop thinking about those little yellow ideograms.

As she drifts off to sleep in the comfort of the family living room with her beloved cat Kenny, she is unaware of the adventure that awaits.

The unsuspecting pair are transported into the wonderfully wacky world of Emojiland where Dolly discovers that lives are very different and cats can talk!

Along their journey, the pair meet a host of colourful characters including the eccentric Emoji twins Okey and Dokey, the enthusiastic and excitable Emoji children, the worldly Emoticon seniors and the 'all seeing, all knowing' oracle that is 'Poogle'.

Dolly encounters Emoji school life, graduation and even a lively line dance in the 'Okey Dokey Karaoke' club! But who does the mischievous and spirited Wally Whirlwind remind her of?

During her encounters with the Emoji folk, whose destinies are pre-defined, Dolly learns a valuable lesson... to respect that she is in control of her own choices and that by making the right ones she can ensure that... THE FUTURES GONNA ROCK!

Dolly is sitting on a chair in the family living room, staring thoughtfully into space.

Her Father enters and calls out to her, affectionately calling her 'Dolly Daydream'. Dolly takes offence and blames her younger brother Wallace for her 'day dreaming' as he has set Dolly the task of creating his costume for the village fancy dress competition. She explains that Wallace wants to go as an Emoji this year but it soon becomes clear that her parents know very little about the popular ideograms. As her mum and dad leave to go shopping/tidy the office respectively, Dolly snuggles back up on the chair whilst sharing her frustrations about her parents' lack of knowledge with her beloved cat, Kenny. The pair soon start to drift off to sleep, thinking about... Emojis!

Emoji twins, Okey and Dokey have been sent to the Emoji outlands by their all-knowing leader, Poogle. They have been told that something will occur, although they are not quite sure what!

A very disorientated Dolly emerges and the twins head over to investigate. They introduce themselves before singing the uplifting and amusing song 'Emojis With Noses'.

Unsure of whether she's dreaming or awake, Dolly joins the brothers as they take her to experience all the fun of Emojiland!

The Emoticons greet Dolly with the upbeat song 'Hello Dolly' before the entrance of Soneary. (Poogle's apprentice and the distant cousin of Safari!)

Soneary informs Dolly that Poogle told them of her visit, as he knows everything, and is looking forward to meeting her.

As Soneary exits, rebellious Wally Whirlwind rushes in dressed as a rock star. He introduces himself in an 'Elvis' type manner before playing his guitar... badly!

Dolly learns that Wally could end up in big trouble with Poogle for wanting to be in charge of his own destiny; In Emojiland, Poogle decides everybody's fate!

Okey and Dokey tell Dolly she has a lot to learn and the trio head off to the schoolhouse.

Twelve junior Emojis, wearing T-shirts with their names on, are seated on benches as their teacher, Miss Take, begins their lesson.

Miss Take introduces Dolly to the Emojis and explains that today is a very special day as the children are about to graduate from Emoji-school. After the introductions have taken place, Dolly notices a familiar furry face lying on the floor... It's Kenny the cat and much to Dolly's astonishment, he can now talk and is donning a rather fetching pair of red boots!

Dolly has many questions so Miss Take invites the Emoji children to answer them. Dolly soon learns that the names upon their shirts are their 'baby names' and they will receive new identities upon graduation. Each child will be Poogle-ised during a big ceremony at Poogle Palace where Poogle will reveal their destiny. The children then educate Dolly about their creator with their school song 'Shigetaka Kurita'.

Miss Take announces that it is nearly time for the ceremony and although the children believe that Poogle knows best, they are clearly very nervous that their fate is in his hands. Will they end up being an Emoticon, a character, an animal or even an object?

After they sing the touching song 'What Will We Be?' Dolly is unsure if she feels happy or sad for them. Miss Take reassures her that everyone will be happy in the end but it then transpires that it doesn't always go to plan... A long time ago, Okey and Dokey were in charge of handing out graduation certificates but they messed it up! Miss Take had her certificate mixed up with her friend's so it wasn't actually her destiny to become a teacher... Miss Take was a mistake!

Dolly, Kenny, Okey and Dokey enter Poogle Palace to be greeted by six Cheerleaders. They are Poogle's fan club and rave about how fantastic he is before performing the amusing 'Poogle Song'. As the song comes to an end, a fanfare is heard heralding the entrance of the M.C., who welcomes everybody to the graduation and announces Poogle's entrance.

Poogle slowly enters with his walking stick, helped by Soneary, and positions himself on the Poogle throne. During the 'Graduation Theme', Poogle performs his magic and the young Emojis are transformed within the Poogle Pod before being handed their graduation certificates. The graduates then head off to reveal their new identities at the 'Okey Dokey Karaoke Club'.

Wally Whirlwind again rushes on, this time dressed as a pirate. He has missed the ceremony and although he could be in big trouble, he does not seem to care! His energetic ways and blase attitude reminds Dolly of someone, but she can't quite put her finger on who that might be.

Dolly, Kenny and the Emoji twins head over to the clubhouse to congratulate the new graduates.

Dolly congratulates all of the Emoji children and discovers that they are all happy with their new identities whilst Kenny takes a particular interest in Milly Mouse!

DJ, Ravin' Rob enters, takes his position behind the DJ desk and plays the energetic, country style song 'The Okey Dokey Emoji Karaoke'. During the song, the Emoji children, the twins and Dolly perform a lively line dance.

Although Dolly is having lots of fun, seeing the Emojis enjoying themselves with friends and family has made her think of home and how much she misses it. She sings the heart-warming song 'Friends Are Forever' before she asks Okey and Dokey for their help to get her and Kenny back home. The foursome decide to go and seek the help of Poogle. After all... he knows everything!

As Dolly, Kenny and the Emoji twins enter Poogle Palace, they discover that they are not Poogle's only visitors. A very sheepish Wally Whirlwind has come to face Poogle after he missed the graduation ceremony. After a disapproving word from Poogle, he is handed his certificate and sent to the Poogle Pod. Poogle then turns his attention to his homesick visitors.

He informs Dolly that, as she and Kenny entered Emojiland by falling asleep thinking about Emojis, therefore they must dream of home to return. He hands Dolly a certificate before they say their farewells.

As Poogle shuffles off with the help of Soneary, Wally Whirlwind yet again rushes on this time dressed as an astronaut! He is happy with the destiny Poogle has given him as he LOVES the costume. There's just one problem... he's scared of heights!

It's now time for Dolly and Kenny to say their goodbyes to their new found friends. Okey and Dokey escort Dolly to a chair and as she drifts soundly to sleep with Kenny by her side, they tell her not to forget that friends are forever.

Back in the family living room, Dolly's Father again discovers her asleep in a chair.

As he wakes her, she starts to wax lyrical about her adventures in Emojiland and its friendly inhabitants including a talking Kenny, who is also stirring from his slumber, minus his red boots! Her parents affectionately mock her imagination and her daydreaming.

Dolly realises that she is still holding the certificate that Poogle gave her and she opens it, revealing a drawing of an Emoji astronaut. Realising that it is for her brother Wallace, she hands it over to him and it suddenly dawns on her who Wally Whirlwind reminded her of so much! Wallace is more than happy with his costume suggestion; in fact, he thinks it's a winner!

As Dolly yet again mentions her 'dream', her Father tells her she's got to wake up and deal with the real world.

She explains that it's OK to have dreams and the starting point is deciding what you want to be.

The most important thing is having the choice to decide your own destiny and that is exactly why.... 'The Future's Gonna Rock'!

Non-speaking roles: The addition of a Chorus sitting offstage is recommended, if available.

This reduced cast list has been achieved by giving 3 actors two roles, and reducing the number of Cheerleaders from 6 to 4; the Emoticon Seniors from 8 to 4 and the Emoji children from 8 to 4. Some lines are covered by other actors as described above.

"I like the idea of an Emoji themed musical as it is something children will really relate to. I thought the songs were very catchy and I loved the different musical genres used. I think children would really enjoy singing them and would pick them up very quickly. Love the orchestration too especially the energetic rhythms of track 5. I can envisage being able to add some great choreography. The script is full of fun as Dolly meets the different Emoji characters."