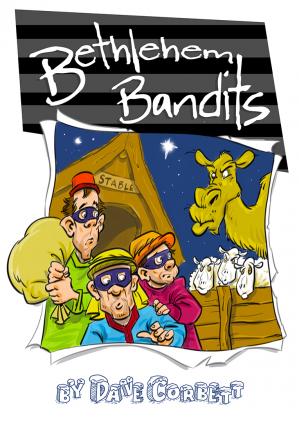 A hilarious new twist on the traditional nativity

Outside the ancient City of Bethlehem, a group of Bandits are busy plotting new crimes. These Bandits aren't exactly nasty or scary though. In fact, they top the list of the most useless band of Bandits in the country and what they don't realise is just how special this night will be. When they fail to steal anything from Mary, Joseph, the three Kings and even the Shepherds, they decide to change their ways.

Packed full of humour and memorable songs, this comic twist on the traditional nativity is perfect for a larger Christmas production with older primary school children.

The Bethlehem Bandits are camped outside the city, reviewing their annual report. When they realise what poor Bandits they make, Brainicus announces how he has been considering quitting bandit life and going to school.

On the road to Bethlehem, the Bandits meet Mary and Joseph. The Bandits consider robbing them, but when they realise that the travellers have nothing of value and that Mary is soon to give birth, they decide that it would not be right, so they leave. With the Bandits gone, Joseph is left to console Mary and help her finish their journey.

The Bandit leader Bossicus is angry that the Bandits failed to get anything from Mary and Joseph. Hoping they might be successful a second time, he sends them to follow up on a rumour of three rich men passing over the road with camels.

The Bandits discover the three Kings' camp and after a comedic scene with the frankincense and myrrh, decide to rob the Kings of their gold. When they discover that the gold is a gift for a new baby, the Bandits decide against taking the gold, and leave the Kings to carry on with their journey.

Scene Five: A Field Outside The City

Whilst tending their sheep, the Shepherds are visited by an Angel who tells them that baby Jesus has just been born. The Shepherds decide to leave in order to see the new baby King.

Scene Six: A Field Outside The City

With the Shepherds gone, the Bandits attempt to rustle some sheep. When a Bear interrupts them, they flee, scared.

Brainicus finally decides he has had enough of being a Bandit, and is set to leave for Bethlehem. The rest of the gang bid farewell to him.

Scene Eight: A Field Outside The City

The Sheep and the Camels meet in a field where the Camels show the Sheep how it should be done, singing wise.

Whilst working in the stable, Brainicus thanks the stable owner for giving him a job despite his past, and insists that he has turned over a new leaf. The Shepherds and Kings enter and crowd into the stable to see the new baby. Brainicus enters with the rest of the Bethlehem Bandits, who want to pay their respects to the child and who have also decided to turn over a new leaf.

In addition to the characters listed a Chorus of (8) Angels is required to say/sing a line together in scene five.

Note: The Chorus of Angels is required to say/sing a line together in scene five.

Non speaking roles: Bear (played by another actor as listed above).

"Fun and easy to use with catchy songs which the children enjoy singing and acting to. "